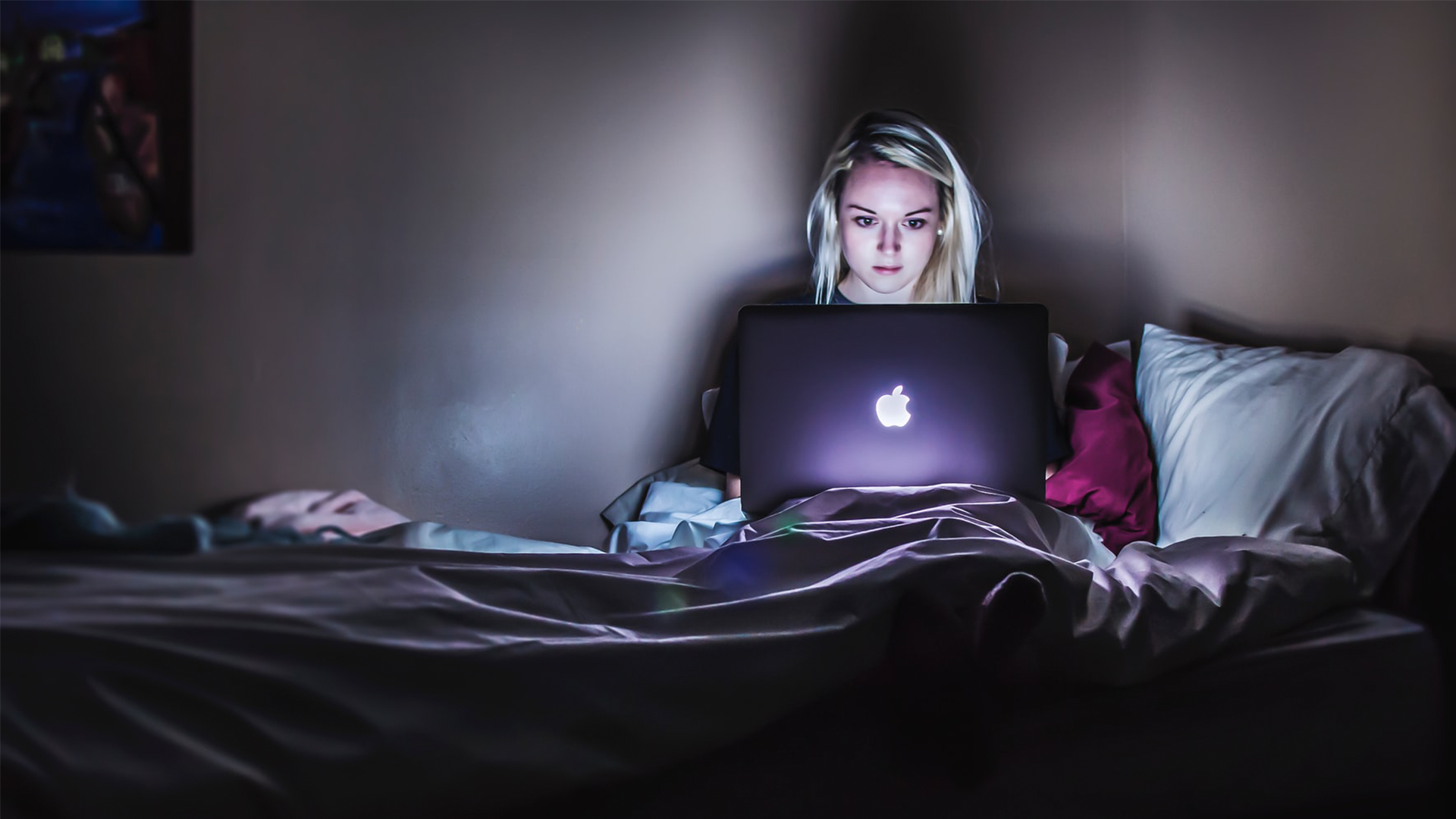 By now, most people know that blue light emission has an impact on your eyes and sleep. But what is it about blue light that adversely affects your ability to sleep? And do those trendy blue light glasses really work to prevent eye fatigue and promote better sleep?

Before you purchase blue light blocking glasses or make changes to your daily routine, you should understand the science of the light spectrum and how blue light affects the body and biological processes.

What Is Blue Light?

Visible light is a type of electromagnetic radiation (rays). There are other types of light on the electromagnetic spectrum, such as UV rays, microwaves, and radio waves.

The length of waves visible to the human eye is between 740 and 390 nanometers (nm), with violet/blue light at the shortest end and red light at the longest end.

What is commonly referred to as blue light is between 400 and 450 nm and is technically in the violet-colored portion of the spectrum. This high-energy visible light (HEV light) has been shown to impact various parts of the body, from aging to skin cancer and eye health.

While some forms of HEV light are natural (such as the rays responsible for skin damage), there is growing concern about the impact of HEV light from artificial LED lighting on eye health and sleep.

Since LED lights are more energy-efficient than incandescent light bulbs, many people have replaced the lights in their homes with these newer bulbs. However, these bulbs produce more blue light than traditional incandescent bulbs and can only be modified by a coating on the bulb that produces a more yellow-hued light.

LED light from electronic devices, however, doesn’t have such a simple fix.

Most modern electronic devices use LED lights, resulting in people staring directly at blue light for extended periods. As of 2021, the average American spends roughly 10 hours and 29 minutes in front of a screen (computer, TV, and mobile devices).

Those who spend more time on their phone, computer, or other electronic devices are likely to have disturbances in sleep caused by the impact of blue light on melatonin production.

While it can be tempting to send one last Tweet or reply to that text late at night, putting the phone away before bed is essential to getting better sleep.

At a minimum, you should avoid looking at a screen 30 minutes before bed, but some experts recommend up to 2 hours.

Circadian rhythms are the natural biological cycles found in many species and other living organisms. In humans, they are responsible for the physiological processes that follow a 24-hour cycle, such as the sleep-wake cycle.

A critical mechanism of the sleep-wake cycle is the body’s natural release of hormones at specific points along the cycle. The body releases cortisol (a hormone responsible for alertness) and melatonin (a hormone that promotes sleep) to maintain the 24-hour cycle.

What does hormone release have to do with phone use? The body releases melatonin, which helps induce sleep, in response to darkness. The artificial light from electronic screens can “trick” the brain and block melatonin production.

A review of multiple studies on circadian rhythms and blue light showed that two hours of blue-light exposure suppresses melatonin production. However, the production process readjusts relatively quickly. Melatonin concentration can recover within 15 minutes after the blue light source’s removal.

“‘Using the mobile for at least 30 minutes (without blue light filter) after the lights have been turned off’ showed positive correlation with poor sleep quality, daytime sleepiness, sleep disturbances and increased sleep latency.”

According to MarketWatch, the global market for blue light blocking glasses reached $22 million in 2020 and will likely hit $38 million by the end of 2026. The demand for blue light glasses is certainly there, but do the products make a significant difference for users?

While there’s a lot of hype about blue-light blocking glasses, the science isn’t conclusive on many of the claims made.

In 2019, Optometry and Vision Science published a study analyzing lenses from seven brands that claim their product blocks blue light.

The lenses tested blocked up to 96 percent of light up to 412 nm, but their effectiveness declined as the light moved into the true blue range at 460 nm. While one brand blocked 73 percent of the high-energy visible light, another brand only blocked only 8.3 percent.

Before purchasing a pair of blue-light blocking glasses, you should do a bit of research into that particular brand to see how much blue light they actually block.

What About Anti-reflective Lenses?

Anti-reflective lenses are another potential eyewear solution for improved vision and reduced eye strain, as they allow for more light to pass through the lens, with less light reflected in the glare.

Anti-reflective lenses and anti-reflective coating work in much the same way; they interfere with the waves of light as they reach the lens. This allows more light to reach the eye, so less light reflects back. Since more light reaches the eye, this generally results in a clearer visual field, decreasing squinting and eye strain.

As previously mentioned, the American Academy of Ophthalmology does not recommend buying specialized eyewear to reduce eyestrain and maintain a regular sleep-wake schedule. Instead of purchasing any blue-light-blocking gadgets, you can make the following behavioral changes to promote eye and sleep health.

The simplest strategy to reduce sleep disruptions caused by blue light is to establish a nighttime routine that doesn’t involve screens. Specific recommendations from eye and sleep experts vary, but there’s a consensus that you should put your devices away at least 30 minutes before bed. Turning off screens earlier certainly won’t hurt.

The “20-20-20 rule” is another simple strategy for reducing eye strain and fatigue. Every 20 minutes, take a 20-second break to stare at something 20 feet away to give your eyes a short rest.

Strengthen Your Eyes with Better Nutrition

Lastly, research suggests you can prevent macular degeneration with vitamins A, C, E, and the mineral zinc.

As macular degeneration is the leading cause of vision loss, those looking to protect their vision in the long term need to ensure they’re getting the proper nutrition for good vision.

Omega-3 fatty acids decrease inflammation, another factor involved in macular degeneration. To get sufficient amounts of vitamins A, C, and E, you can increase your intake of naturally vitamin-rich foods like broccoli, mangoes, carrots, and spinach are good choices.

Chickpeas, red meat, and yogurt contain the mineral zinc, and foods like walnuts, flax, and salmon are good sources of omega-3 fatty acids.

Eating a nutritionally dense and diverse diet protects your health and can reduce the damage that occurs to the eyes with aging.

While blue light by itself has not been proven to be the main driver of eye strain and fatigue, it certainly plays a role in circadian rhythms and your ability to fall asleep.

There is no “quick fix” to protect our eye health and sleep pattern. Unfortunately, it requires more than simply putting on a pair of glasses. It is essential for optimal eye health and sleep to build eye-health practices, like those described above, into your daily routine.